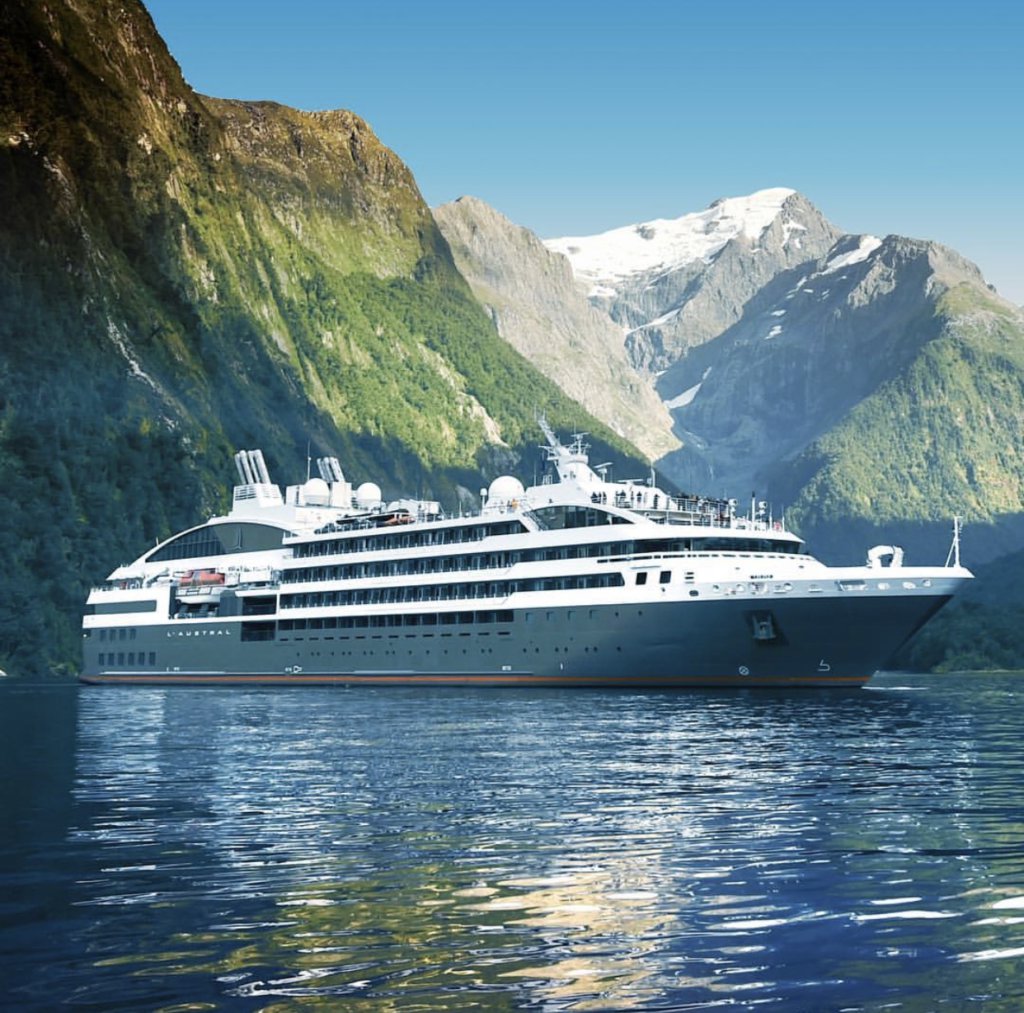 If your image of expedition cruises is square shaped boats that look like northern icebreakers, with hulls painted red, L.L Bean clad birdwatchers as passengers, bare-bones cots and dining rooms that resemble a college cafeteria, that’s about to change. PONANT, a French company, features sleek vessels that might be confused an oligarch’s superyachts. Onboard, international menus have been designed by Alain Ducasse, French wines and Veuve Clicquot Champagne are included in the price, and you can top it off with Ladurée macaroons or relax in the spa. New expedition yachts will feature a lounge below the waterline with an exterior window, putting guests eye to eye with marine life.

A crew member prepares a room onboard the PONANT’s ‘L’Austral’ in Bordeaux on April 25, 2016. The line is bringing a luxury approach to expedition cruising. Five new ships are on order. (Photo credit: GEORGES GOBET/AFP/Getty Images)

Marseille-based PONANT was co-founded in 1988 by its current president, Jean Emmanuel Sauvée, a veteran of the French merchant marine. But, it’s the 2015 acquisition by Groupe Artemis, the holding company of French billionaire Francois Pinault and his family, that is changing the company’s course and putting it center stage. Of course, the spotlight is no stranger to the Pinaults whose holdings include auction house Christie’s and Kering, the home of well-known luxury brands such as Gucci, Brioni, Bottega Veneta, Saint Laurent, Stella Mc Cartney, Ulysse Nardin and Boucheron. Son and head of the family business Francois-Henri Pinault is married to award-winning actress, producer and activist Salma Hayek.

“Demand in the luxury cruise market has been robust, buoyed … by an affluent and international client base, particularly from North America and Southeast Asia,” Artemis said in a statement at the time of the purchase, and PONANT is now getting a high powered messenger to get the word out on this side of the Atlantic. Edie Rodriguez, who in three years as CEO of Crystal Cruises transformed the company from two ocean cruise ships into a diversified luxury travel provider with yacht cruising, river cruises and even private jets, moved to PONANT last Fall as Americas Brand Chairman and Corporate Special Advisor. The high-profile Rodriguez who tirelessly beat the drum during Crystal’s evolution now faces perhaps even a bigger task in spreading the gospel of expedition cruises. She calls PONANT “the Ferrari of the category.”

Why the push now?

The short answer is after digesting four new ships since 2010, for PONANT there are four more 184-passenger expedition vessels coming over the next two years, plus a first of its kind electric-powered luxury icebreaker scheduled to debut in 2021.

Filling the new capacity means changing long-held perceptions of expedition cruising say the experts. “The impressions were that (expedition) ships were old, ugly and very basic. The perceptions were people who sailed them were boring,” says Mary Jean Tully, CEO of Tully Luxury Travel, a top seller of luxury cruises. Of the typical expedition ships, she adds, “The dining experience was more cafeteria style and it was never important about the food or the entertainment or spa. Some of the ships to this day are still like that.”

Michael Holtz, CEO of luxury travel agency group SmartFlyer says when pitching expedition cruises to customers, “Sometimes they look confused. A lot of them think its National Geographic from the ‘70s. The clients we sell on expedition cruises love it, and want to do it again.”

In an interview during the International Luxury Travel Market in Cannes, Rodriguez says PONANT is different, starting with its take on dining. “As expected on an elegant five-star yacht, PONANT orchestrates tailor-made gourmet cuisine prepared by French chefs that take its inspiration from the destinations and ports of call. The cuisine features fresh, local ingredients on all cruises in a modern, elegant environment,” says Rodriguez.

While the average age of its customers is early 50s and up, Rodriguez believes PONANT’s product will appeal to families, younger couples, groups of friends and family and even honeymooners. The line is already popular with singles as there is no extra supplement.

Rodriguez says despite the look and feel of a superyacht, the PONANT vessels are specifically designed for expedition cruises, meaning the ability to cruise in extreme conditions and get into small harbors. They are also built to easily launch zodiacs, and the company has its own PONANT University where all staff is trained. Itineraries are plotted years in advance and only move forward if it can be proved they won’t adversely impact the environment. While one might think of the Arctic or remote islands with rare bird and marine life as the typical venues for expedition cruise itineraries, Rodriguez says PONANT itineraries span the globe, including traditional big ship destinations such as the Mediterranean and Caribbean. In fact, it offers 300 different itineraries.

A PONANT Caribbean itinerary, however, includes places like the San Blas Islands, 365 coral islets. Guests visiting the island of Holandes Cayand meet the Kuna people who still live off hunting and fishing. In Europe, a “Jazz at Sea” journey from Lisbon to Rome features clarinet player Christian Morin and his musicians eschewing traditional ports, stopping instead in Cadiz, Malaga, Motril, Altea, Palma and Mahon over nine days.

PONANT is not alone in trying to move the segment from granola to Grand Cru. Silversea Cruises, which has been in the market for a decade, last year added the fourth ship to its expedition fleet. Next year Quark Expeditions debuts the Quark World Explorer, its most luxurious expedition vessel and even Norwegian mail carrier Hurtigruten is making a push into expedition itineraries with new, more deluxe ships.

SmartFlyer’s Holtz says players across the expedition cruise market are adapting to today’s consumers who want something new and different, but don’t want to sacrifice pampering. He says the new breed of consumers interested in expedition cruising want high-end offerings, including quality of food, service and overall ambiance. “People today want more out of cruising, they want an experience along with everything else,” he says. Tully adds, “(Expedition cruise lines) fulfill needs like adventure, cultural immersion and nature.”

Rodriguez says part of what defines a luxury expedition cruise from mainstream luxury cruises is the small group shore and water excursions led by highly educated experts that are combined with onboard lectures. The smaller ships also mean access to smaller ports and harbors as well as waterways and passages bigger vessels can’t access. It means more time front and center with exotic wildlife and local cultures. The limited number of guests on each voyage gives the ability to visit places that aren’t meant for large amounts of visitors.

Jack Ezon, CEO of Ovation Vacations, says his expedition cruise sales have grown 22% in the past three years due to new luxury product, shorter itineraries that are attracting a younger audience, and climate change. “Many people want to go now before it is too late to see the polar regions, before global warming permanently alters it,” he says.

Ezon is already a fan of PONANT. “(They have) the best all-around Antarctic experience where luxury mega-yachts take passengers deep into Antarctica with French cuisine, modern décor and an international crowd.” He reels off another half dozen lines that he says are either adding expedition type itineraries to their luxury offerings or adding more luxury to their expedition chops.

He says the idea of expedition cruises solely to see seals, whales and birds is dated. In Finland, there are Reindeer roundups with ATVs, ice fishing, dog sledding, and even driving race cars on a frozen track.

Rodriguez says with the Blue Eye, the underwater window on its four upcoming vessels, guests will hear underwater sounds from as far as three miles away, adding to the visual spectacle of watching the sea life with your favorite libation in hand. She says the three-tiered marinas are designed so you don’t have to be a gymnast to partake in the adventures and calls the line’s vessels “beautiful, understated, elegant design.”

Another appealing aspect Rodriguez cites is flexibility, meaning that based on weather or when nature brings something special, the itinerary can be adjusted giving guests a bit more time to witness something special. She says in addition to more families with both teens and adult children there is increased demand for full ship charters, including reunions and unique destination weddings.

For cruisers who are concerned that smaller ships have fewer choices, Rodriguez notes there are two open-seating restaurants and 24-hour room service as well as multiple bars and lounges. While PONANT’s signature is “incredible enrichment programs and naturalist presentations,” entertainment includes singers and even production shows. Another luxury move is providing options with both king and queen-sized bedding.

Can expedition cruises become the new black for the already sizzling luxury travel segment? Rodriguez says she believes with the passion for expedition cruising from PONANT’s founder and Kering’s deep pockets “the best is yet to come.”