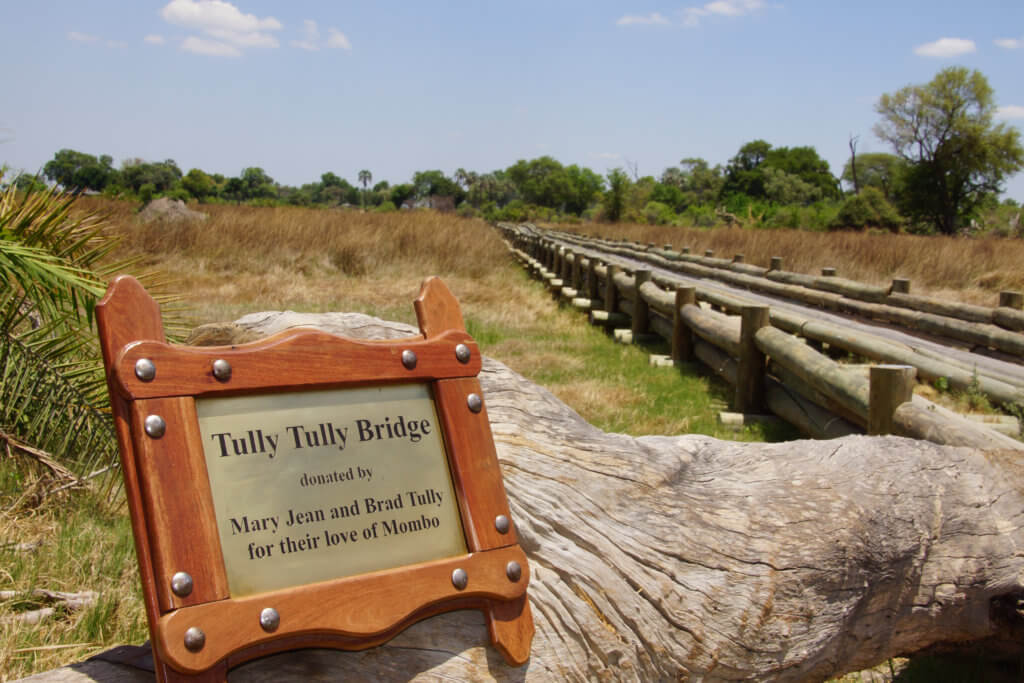 Mombo Camp, rated the #1 Luxury Safari camp in Botswana and owned by Wilderness Safaris, just built a new bridge leading in to Mombo and have named it the “Tully Tully Bridge” after Mary Jean and Brad Tully for their love and support of Wilderness and their ongoing beliefs in Conservation, Preservation and Sustainability.

The Tullys have supported Wilderness with their “Children of the Wilderness” programs as well as other endeavors.

Mary Jean Tully said, “This will be our true legacy, as Mombo means so much to both Brad and I.”

Due to its location on Chiefs Island in the Okavango Delta, Mombo is rated as “The best for game viewing in Africa.” Being at Mombo is like being in a wildlife documentary. The setting is ideal and the guides are some of the most experienced in the industry. Mombo is the flagship property of the Luxury safari operator. Several Award winning Documentaries have been filmed at Mombo Camp. Mombo is Wildernesses most famous property and has won awards from Conde Nast Traveler and Travel & Leisure to name just a few.

Wilderness Safaris is a conservation organization and ecotourism company dedicated to responsible tourism throughout the areas in which it operates in Africa. Their goal is to share these wild areas with guests from all over the world, while at the same time helping to ensure the future protection of Africa’s spectacular wildlife heritage and sharing the benefits of tourism with local communities.

Established in 1983, Wilderness Safaris operates camps and safaris in Botswana, Congo, Kenya, Namibia, Malawi, South Africa, Zambia, Zimbabwe and the Seychelles and is run by a group of likeminded wildlife enthusiasts who came together to build a successful safari business, delivering a unique experience for guests, fair returns for shareholders and stakeholders, while ensuring that Africa’s pristine wilderness areas remain sustainably protected.

Wilderness Safaris operates privately on over 3 million hectares (8 million acres) of Africa’s finest wildlife reserves in more than 70 lodges and camps. There is no one style set in Wilderness camps; rather they celebrate the difference and uniqueness of each area and its wildlife so that each group of camps has its own identity, feel and character.