COVID-19: Airlines and OTAs say, 'Don't Call Us' As Travel Agents Come to the Rescue

While airlines, hotel companies, and online travel agencies (OTAs) are telling customers, “Don’t call us, we can’t handle the volume of calls,” and in some cases disconnecting callers after hours on hold, consumers who use traditional travel agents are not only getting advice. They’re getting rescued. They are getting rebooked. They’re getting home. And in some cases, they’re even getting a shoulder to lean on, and a bit of daydreaming, chatting about where they want to go after the COVID-19 Coronavirus crisis recedes.

Jennifer Doncsecz of VIP Vacations Inc., part of The Affluent Traveler Collection, helped move several wedding groups in addition to getting customers home. She says, “I had an agent on a chat with a tour operator where her wait time was seven hours.”

Mary Jean Tully, whose Toronto-based Tully Luxury Travel is a major player in the cruise market adds, “We literally had hundreds of people on cruises scattered all over the world all and brought everyone home without incident.” She says, “The cruise lines have been amazing how they have handled everything.”

However, she notes, “I felt sorry for those people that didn’t have a travel agent to advocate for them as there’s nothing more important than to have people that really know what they’re doing to facilitate everything.”

Tully had 98 passengers on Crystal’s world cruise. “Some decided to get off at various ports and fly home. Others stayed and returned from Australia (where the cruise was ended),” she says. 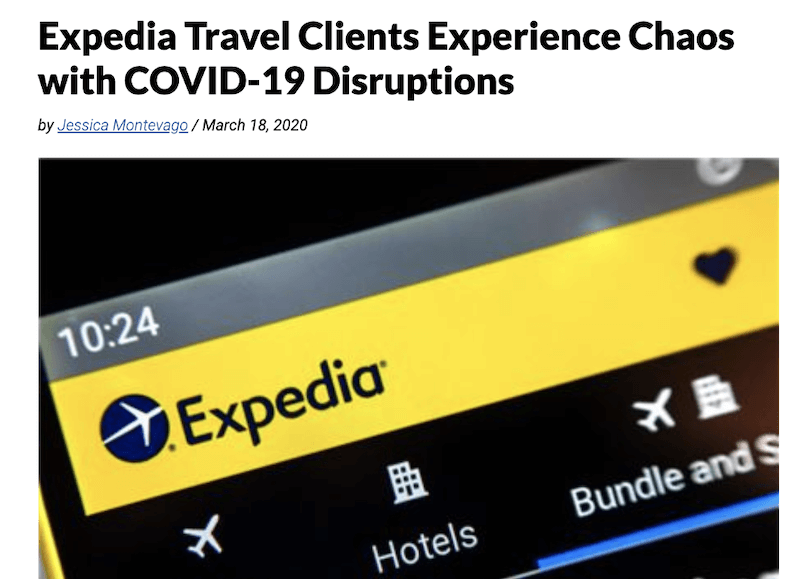 Susan McDougal of Suzqz Travels, a member of Signature Travel Network, tells us, “I had two couples, one in Sri Lanka on route to Cairo, and another couple doing missionary work in Bangladesh. Starting on Thursday, March 12, it was evident they needed to come home, although the one couple still wanted to experience Egypt. On hold with both Turkish Airways and Qatar Airlines for hours, being hung up on, not getting through, I called in my mom, a travel industry vet, to get on the phone with one airline as I called the other, using my computer as a third phone, emailing and texting the travelers, assuring them that I would get them home. By Friday…both couples had boarded their international flights that evening. After a sleep deprived night, I closely monitored their flights, texting them to notify me when they landed in the U.S. Saturday night I was able to breathe a sigh of relief when the last flight arrived into (Washington) Dulles (airport). Now, on to monitoring future reservations.”

While many consumers were frustrated by refund policies, Richie Massa of Lorraine Travel, says for one client who suffers from bronchitis, he was able to negotiate a full refund for his client after the hotel only wanted to provide a travel credit on a fully prepaid reservation. “We liaised with the client’s pulmonary specialist and had an expedited letter issued by her doctor sent directly to the hotel with the strong recommendation to not travel. Within 24 hours, the hotel accepted and empathized with our client’s situation, and agreed to issue a full refund of payment, as opposed to the originally proposed credit.”

Tiffany Bowne, an advisor with Tzell Travel Group’s All-Star Travel Group had a family set to go to Disney World, scheduled to arrive just before closure of the park was announced. While at the same time securing their refund for the canceled trip, she found an alternative option her clients could reach by driving.

But that was just the start. A corporate client with over 300 travelers canceled all nonessential travel effective immediately. Bowne got all travelers home from their locations, canceling future bookings for 60 days, at the same time recording and auditing waivers and credits.

Protravel’s Richard Engle recalls, “Within 15 minutes of the Presidential speech on March 11, I had calls from three frantic parents with kids stuck in Europe. It was only after I took these calls that the President’s remarks were clarified to indicate that the ban on travel from Europe did not include (U.S.) residents. But by that time fear had taken over, and they wanted their loved one’s home. While I was processing these calls, I was operating on a 30-hour day myself, having returned from Europe the same day, so by the time of the President’s speech, it was already Thursday in Europe and we had until Friday to get these people home.”

For Sarah Crimian, a Signature Travel Network select advisor with Accent on Travel, she had clients stranded on the opposite side of the world. “My clients were enjoying their first of two cruises in Australia and New Zealand when they were advised the ship was docking in Sydney and their second cruise was canceled as a preventive measure due to the Corona Virus outbreak. The clients had booked their own flights using frequent flyer and were now stranded, unable to use them, nor find any seats through the cruise line’s onboard service desk.” Crimian was able to book the last two seats in premium economy on a flight back to the U.S.

Amid cancelations, advisors are also helping make sure their clients’ dreams of those dream vacations continue despite the crisis.

Ebony Aelterman of Family Travel Adventures, also an Affluent Traveler Collection agency, says, “This week, I am working to reschedule a 20th anniversary European river cruise and land stay for a wonderful couple, who have been looking forward to this trip for over a year. Rather than instill panic, and be reactive, I proactively reached out to them for alternate dates, and reassured them that I would work with them every step of the way…again. This gave them the confidence to take my advice and are now looking forward to celebrating later this year.”

Nicole Mazza, chief operating officer of Travelsavers, a consortia of independently owned and operated agencies with over $20 billion in combined sales, put it this way, “Our agents are experts in travel and caring for their clients through situations such as this. In these uncertain times, clients need an advocate and an expert who understands the industry and has strong relationships with travel providers, not an automated system or a chat function. Travel professionals are working 16-hour days to ensure their clients are taken care of, no online travel provider is offering this much needed high touch service.”